»popularizing insistence« was the fourth Klausur in a series of events which I organize at the Laboratory for Applied Virtuality (CAAD, Institute for Information Technology in Architecture, Swiss Federal Institute of Technology ETH in Zurich) in collaboration with the Stiftung Werner Oechslin in Einsiedeln, Schwitzerland. It took place from Feb. 1-3 2013, and will shortly be documented on vimeo.

Technology is not simply technology, it changes character over time. We suggest there is a twin story to it. We call it metalithicum and postulate that it has always accompanied the story of technology since the Neolithic era. It concerns the symbolics of the forms and schemes humans are applying for accommodating themselves within their environment. We assume that the protagonists of this twin story, the symbolics of those forms and schemes, are also not simply what they are but change character over time. Through the Metalithicum Klausuren, we seek to engender a theoretical perspective on one of the central areas of today’s social dynamic, namely the link between information technology on the one side, and architecture, urbanism and the city as a life form on the other.

In the fourth Metalithikum Klausur we would like to consider and think about a strange possibility: that of a Utopian Conservativism. How could we today articulate an idea of the city as a place for living well. How could we develop the idea of a city as a place where people can be their own master (without getting caught up in unjust dependencies nor feeling driven to act tyrannically) and wield their powers and capacities, with no need to act out violently. How could we articulate an idea of the city, in short, where mastership and the maintenance of a domus (Herrschaft, oikos) were in proportion again with the increasingly global scale at where – after the modern realization of generic infrastructural urbanity – political wielding of powers (das Walten, in der Gewalt haben, polis) plays today? We suggest to postulate the Quantum City as such a model-to-be-articulated. We would like to conceive of it as a follower to the Mechanical or Cosmic City of the medieval ages, and the Dynamic or Balanced City of modern times.

As a point of departure I sent a short psycho-political essay in which I imagine existentialists to begin populating the symbolic grounds of urban genericness. You can find it here.

We would like to approach these grand interests on the larger horizon by taking an architectonic perspective. Unlike the Mechanical or the Dynamical City of modernity, which were functionally-operative either within a Cosmic Order or within Balanced States of Nations or Federations, we are, for a few decades already, starting to experience an inversion in terms of urban activity schemes. Neither is the Quantum City‘s activity caused in any particular way, nor is it directed at something in particular. It is active more like inert matter, which is – somewhat disturbingly – peculiarly „animate“ if considered on the quantum level of its electrons, protons, and the smaller levels of magnitudes respectively.  Similarly, the Quantum City is „animate“ beneath the manifest forms of the urban conducts in a similarly pulsatile manner. Unlike the Mechanical or the Dynamic City, the Quantum City is operative, in this pulsatory manner, before and independent of the various operations in this state of operativity being functionally defined in any particular way. This is why the Quantum City is, different from the Mechanical and the Dynamic City, not strictly rational. This does not mean that things happen without reason, that the Quantum City were the City beyond History, where Time wields all the powers violently. The constitutions of the Quantum City can be articulated and formulated. We would like to call the peculiar units that are articulated, in setting up the constitution of a Quantum City, quantums of cityness. These units cannot be taken as units of measure or magnitudes anymore (as in the Geometrical/Cosmic City), they can also not be accounted for as ordinal units (multitudes) which organize the cardinal indexes to magnitudes (as in the Dynamical/Balanced City). The idea we would like to explore is to regard quantums of cityness as units of an irreducible double-articulation: quantums that are made up of „wave“ and „point“, of „pre-specific genericity“ and „instance of a doped identity“. Let us assume these units are to be – by conception – capable of articulating the consistencies at work in and within what structures globalized urban lives on any level: infra, media and superstructure. Let us further assume, philosophically, this quantum-elementarity of cityness as the complementary dimension to existentiality, and call it that of the insistential. How can we articulate an idea of City whose temples and cathedrals welcome anyone who cherishes insistencies as insistencies, by resisting to apply these general places – temples, cathedrals, topoi – homogenically and uniformally? Not despite of but because of the esteem for the idea of generality, that seems worth to being preserved from dissolving into homogenous genericness.

The idea is that just like in physics, where the quantum level of things can be treated abstractly, by symbolic algebra, we can learn to consider the quantum level of generic urbanity. We must assume thereby, as we know from physics, that the reason at work on the quantum level is literally abundant, yet insufficient – in other, more familiar words, it is probabilistic. Unlike within the geometric-mechanical, or the arithmetic-dynamical scope, where every thing is thought to have its place, its position, its rôle within the larger whole – the Cosmic Order, or the Natural Balance – we can assume that on the quantum level of things, there „is“, potentially, more than can „fit“, actually. Exactly because there is more electrons than can fit, the electrons can jump from one compound to another and thereby constitute the diversity and the transformability of the chemical elements; with the physical elements (the nuclei), we are currently learning to understand an inversion of this dynamics – not in terms of compounding, but in terms of splitting and stringing. It seems radical perhaps, yet not exaggerated, to say that dynamics, on the quantum level, is abounding out of a strange kind of vibrant stasis. Drawing the architectonic consequences from this would mean affirming that we may do well to consider an elementarity of reason which is, somewhat paradoxically, abundant, and hence necessary yet insufficient by principle.

We would like to consider what if, just like it is assumed for the constitution of todays physics, also the constitution of tomorrows cities ought to be regarded as algebraically symbolic. This is not to postulate any sort of ultimately „true“ fabric for constitutions. But as we know from science, the kinds of questions we can ask about our subject alter categorically if we make the step from measured magnitudes to the probabilistic distributions that condition our acts of measuring. While the Mechanical City depends upon the Axioms of a State, and the laws that are decided thereby, the Quantum City‘s citizens would have to learn to understand their city in terms of the symbolic Laws of Conservation and the capacities of the symbolizable symmetries which are articulated and formulated in the legal constitutions of the city. Articulated according to the possibilities derived from constellations in the symbolic Laws of Conservation rather than the Cosmic Order or the Axioms of a State, the Quantum City is neither caused, nor unconditioned, nor absolute in its condition. It domesticates the infrastructural level of modern, generic urbanity. There are no Capitals among different articulations of the Quantum Cities‘ symbolic constitutions. They all compete collectively with the strivings of generic urbanity for an entropic imperial status. Complimentarily they differentiate and cultivate in various ways, and according to various legal and commercial articles, the artificially maintained homogeneity of abundant but insufficient reason which is proper to the elementary conditions provided by generic urbanity. While the Dynamical or Mechanical City – just like the idea of an Imperial State of Global Commonwealth – need to define themselves in relation to the Absolute, Quantum Cities define themselves in competitive relations within the totality of what can be the object of rigorous thought, i.e., what can be demonstrated and negotiated on the basis of abundant but insufficient reason.

The notion of a totality of what can be the object of rigorous thought has been introduced by the early algebraists in the 19th century, especially by George Boole and Richard Dedekind. To think rigorously meant, for them, to treat as its object only that, which can be demonstrated by proof and made explicit in the forms and steps of inference thereby performed, as well as by explicitly stating the made assumptions on which the design of the proof depends. The algebraic architectonics thereby applied differs from strictly analytic forms of architectonics in that it is not troubled by the contingency on the level of the form of the proofs performed. Quite contrarily, as algebraists they take delight in the various forms that can be invented and brought to work as auxiliary structures to keep stable within different heights of abstraction; necessity and judgement are, for them, to be treated as strictly political terms.

my slides from the short introductory lecture: 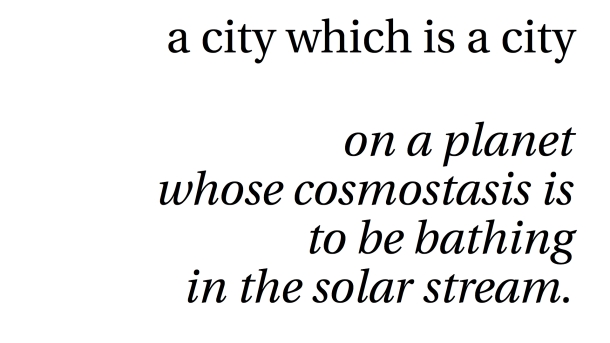 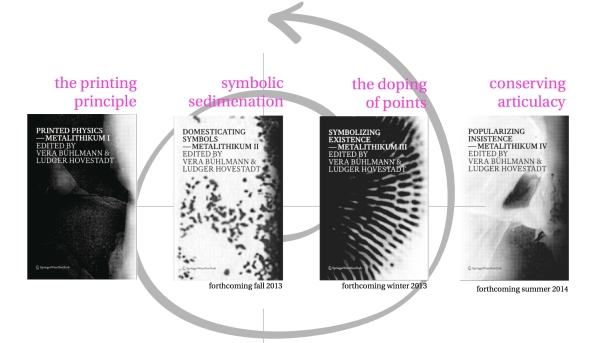 I published the main vectors of my lecture in a series of posts entitled Characteristica Designata:

Characteristica Designata II: Polynominality, and the question of structural amphiboly

Characteristica Designata IV:  algebra as an undiscovered continent, and attempts to appropriate it as the symbolic positivity of ‘pure instrumentality’

Characteristica Designata VI: emerging fields in the synthesis and analysis of data

and some meta-reflections in my notes: One plenum? Many real infinities? Notes on the virtuality of order corresponding to polynomial grammaticality

Books II: Interesting for their mapping of Anchor Points in Discourse

Books I: Interesting as Original Contributions to Discourse