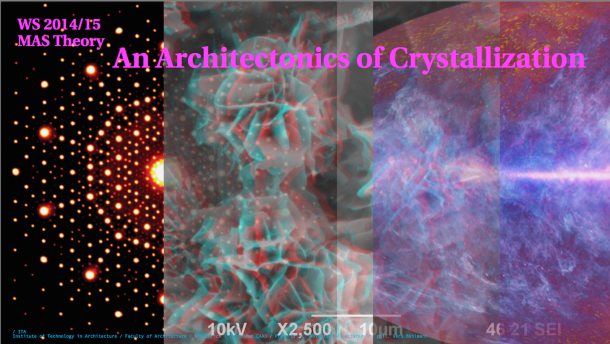 This is the new program for the theory modules I am teaching at the Master of Advanced Architecture Program “Architecture and Information” at CAAD, ETH Zürich.

“Over several centuries, from the Greeks to Kant, a revolution took place in philosophy: the subordination of time to movement was reversed, time ceases to be the measurement of normal movement, it increasingly appears for itself and creates paradoxical movements.“ (Gilles Deleuze, Cinema II, The Time Image)

Our emphasis in this year’s theory course lies on „time”. How can architecture relate to time in a manner that this relation to time informs architecture at large, i.e. not merely the eventual and inevitable aging of houses built, as the retrospective manifestation of architecture’s cultural history. Our hypothesis is the following: if time is no longer subjected to movement, we might learn to see the relative durations of stasis a built house is capable of capturing as being fabricated out of crystals of time. We will assume for such crystals to be constituted by virtually active elements – quantums, minimal units of measurability. In Physics, a quantum is understood as “the minimum amount of any physical entity involved in an interaction“. In likewise manner, we want to explore the postulate that „minimal amounts of any architectural entity involved in an interaction“ can be understood, by attending to crystals of time as the new elements of a new architecture.

The cosmological revolution that time cannot be deduced from the movement of things, but rather constitutes something like a general container for all that ever had or will have an extension in space, was the revolution brought about by Newtonian physics in the 18th century: „We may regard the present state of the universe as the effect of its past and the cause of its future.“ (Pierre Simon Laplace, Essai philosophique sur les probabilités, 1814). For the science and the philosophy of modernity, time has a General Form. Today, some 200  years later, the Quantum Paradigm suggests to contemporary science and philosophy that this assumed general form of time ought to be understood as universal and yet concrete, i.e. as heterogenous and locally singular rather than as homogenous and globally same. Molar processes as we know them from the solidification of matter in crystallization suggest we think about time neither in the terms of continuity nor instantaneity, but how then?

We will cross-read texts from Philosophy, (Astro)chemistry, Mathematics, Communications Engineering, and Cosmology in order to endow the key concepts that demarcate our field of interest with saturation and consistency. Some of these concepts are:

We will structure the theory day in 3 thematic blocks à approx. 2 hours each.

In addition, you are expected to work every weekday a minimum of 2h for preparing readings, small presentations, etc. The assignments are communicated week by week, as we go on.

Naturally, the program is subject to possible adaptation and change. 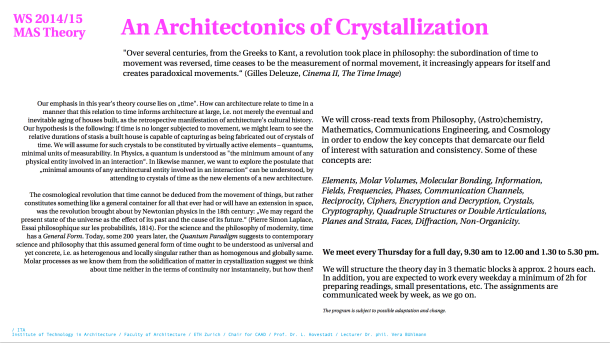 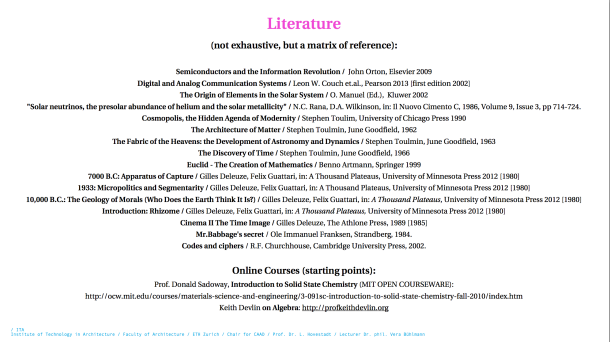 Books II: Interesting for their mapping of Anchor Points in Discourse

Books I: Interesting as Original Contributions to Discourse